In Remembrance of His Majesty King Bhumibol Adulyadej
1927 – 2016

This month, SALA Hospitality joins the Thai people in mourning and bidding farewell to the nation’s late King Bhumibol Adulyadej, who for over 70 years has been Thailand’s guiding light.

The royal cremation ceremony is scheduled to take place from 25 to 29 October 2017. On 26 October, the Thai government has called for the public’s cooperation in refraining from organising all kinds of entertainment, with entertainment expected to be toned down from 21 October until the end of the month out of respect for the funeral ceremonies.

Following the royal cremation ceremony, the government will hold a month-long exhibition from 1 to 30 November 2017 at the Royal Crematorium and Sanam Luang ceremonial ground in remembrance of His Majesty King Bhumibol Adulyadej. 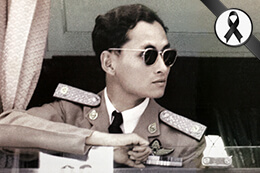 SALA SAMUI CHOENGMON BEACH
Guests interested to learn more about the beloved late king’s life and work are invited to join special outdoor screenings of a short film about His Majesty on 10 and 17 October. These two screenings will be shown on the beach or by the black pool.
www.salachoengmon.com 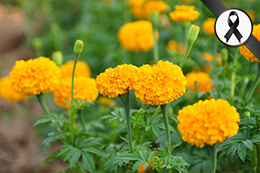 SALA PHUKET RESORT AND SPA
As a sign of loyalty to the late king, people across the country have been encouraged to plant yellow gold marigolds; yellow is the colour of the late monarch. A team of resort staff recently planted a patch of marigolds in the gardens in remembrance of the late king. 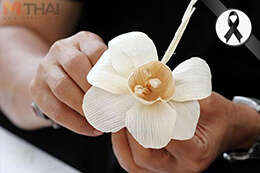 sala lanna Chiang Mai
Across Thailand, the public have been given the opportunity to create sandalwood flowers as a sign of unity and respect for the late king. At sala lanna, guests will also have the chance to make these flowers throughout October. They will be sent to the district office for use in the mourning activities arranged in Chiang Mai.
www.salalanna.com 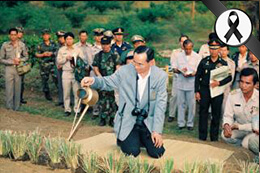 The chefs at sala rattanakosin have created two dishes – Fresh Steamed Organic Vegetables and
Steamed Mushroom Curry in Banana Leaves – available throughout the month of October with ingredients sourced from the Royal Project, one of the late king’s many enduring legacies initiated in 1969 to provide crop alternatives and provide farmers with a source of income.  10 percent of profits from these dishes will go towards the Chaipattana Foundation, a foundation chartered by the late king to promote sustainable development.
www.salarattanakosin.com 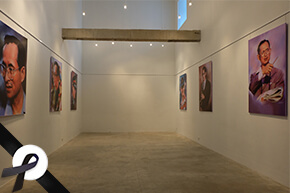 Throughout October, guests at sala ayutthaya are invited to drop by the gallery to see a special exhibition showcasing portraits of the late king using different media. The art exhibition was curated in remembrance of the late king. After the exhibition the pictures will be donated to local schools.
www.salaayutthaya.com 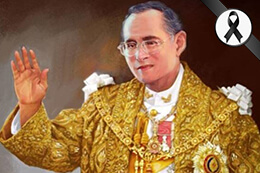 sala khaoyai
In memory of the late King Bhumibol Adulyadej, a large portrait of His Majesty has been erected at the entrance to the property where it will remain throughout the month.
www.salakhaoyai.com