Rattanakosin Island was founded by King Rama I as the capital city of the eponymous Kingdom in 1782; over 230 years later, the former fortified city centre – bordered by Chao Phraya River to the west and moat-like canals to the east – is still a bustling hub of activity.

Visitors are drawn to the old city’s cultural attractions – including Wat Po and the Grand Palace – and the fascinating narrow alleyways in this area. The old city is a hive of energy, where traditional merchants, hawking their wares as they have for generations, exist peacefully alongside a new wave of creative souls which have made this riverside enclave their home.

From sala rattanakosin Bangkok, nestled along the banks of the river in the heart of this historic quarter, some of the best sites can be explored on a self-guided walking tour, allowing guests to stop and smell the roses – literally – and take in the city at their own pace. 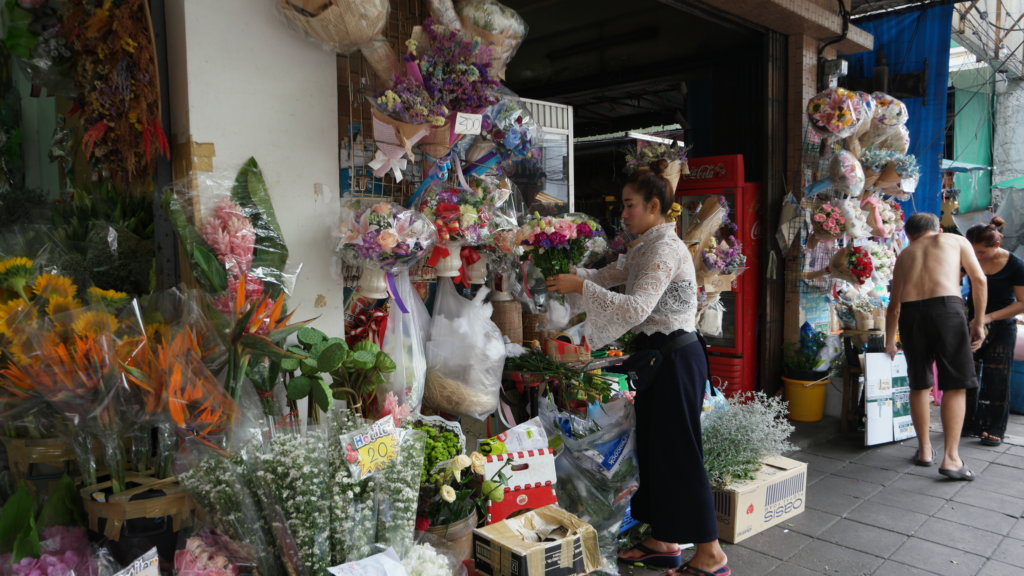 Start your adventure after a hearty breakfast at sala rattanakosin Bangkok with a nice 10-minute stroll along Maharaj Road to the oldest flower market in Bangkok – Pak Khlong Talat – and marvel at the sheer variety of colourful blooms. With its recent renovations, Pak Khlong Talat is now smaller, but cleaner and more organised than before. Orchids are one of most prevalent flowers found in Thailand – how many varieties can you spot? 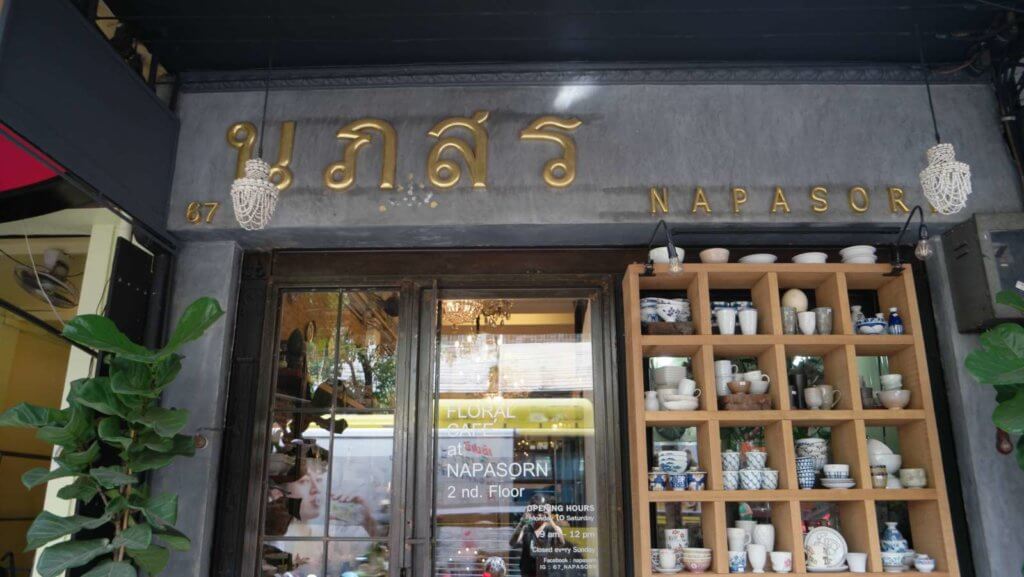 Take a short break with a glass of iced floral tea at this gorgeous café located right in the flower market area. Housed in a three-storey shophouse, Napasorn has been in business for more than 20 years as a flower shop but recently opened up a café on its 2nd floor and an antique shop on the top floor. Come for the café’s urban forest atmosphere, but stay for the small – but delicious – selection of homemade cakes!

A short five-minute walk away, take a crash course in Thai history through interactive multimedia displays designed to engage visitors of all ages at Museum Siam. You can easily spend two to three hours learning about the history of the country as it evolved through three different eras, starting with when the land was called “Suvarnabhumi”, later “Siam”, and now “Thailand”.

You’ll be hard pressed to find one singular lunch spot, so make it a three-course meal to sample the best in the neighbourhood. The area around sala rattanakosin Bangkok is called Tha Tian, one of Thailand’s main ports and centres of commerce since the Rattanakosin Kingdom. Tha Tian still maintains a lot of its old school charm; it is also home to a variety of local eateries and street food vendors selling somtam, barbecue red pork, and pad thai.

For desserts, walk back towards Museum Siam, where across the back entrance you’ll find a food cart, plastic chairs, and a swarm of hungry visitors around the area’s worst kept secret. For more than 50 years, “Uncle Mak” has been selling hot soy milk pudding and grass jelly desserts to loyal patrons. He is there from around noon to 4 p.m. every day except Wednesdays or any other days he does not feel like coming, so try your luck – the 12 baht desserts are well worth it! 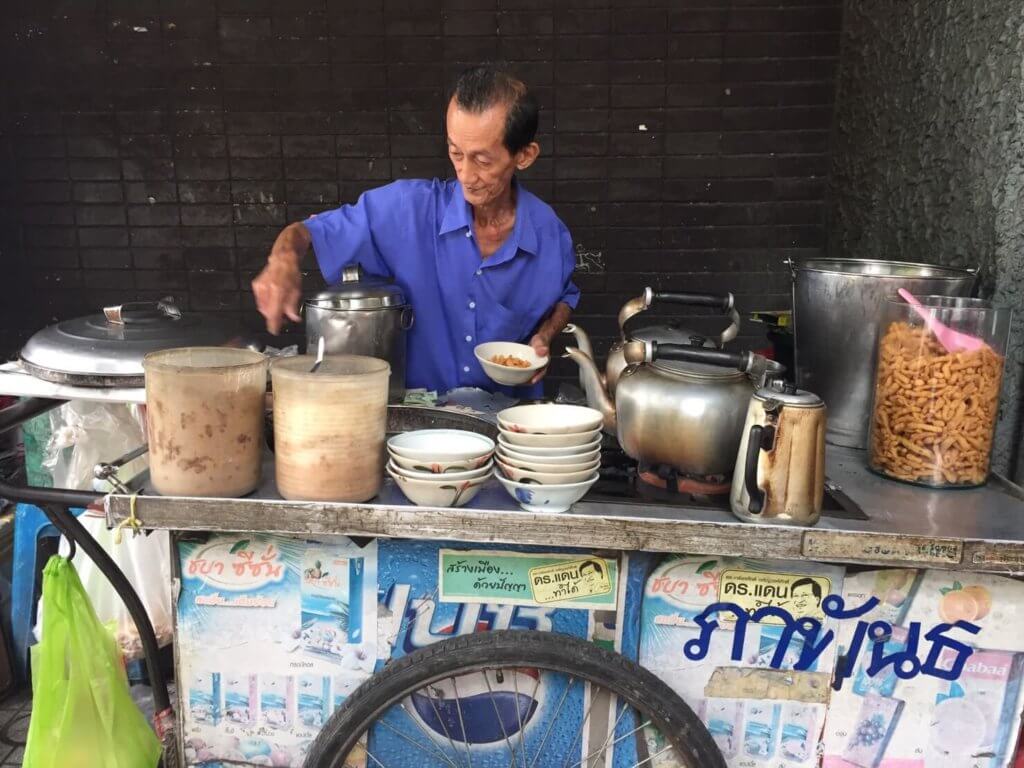 For the final mid-day stop, drop by the hipster Blue Whale Café (a three-minute walk away) for a cup of blue-coloured Butterfly Pea Latte or an ice-cold glass of Blue Whale Sour for an afternoon pick-me-up. 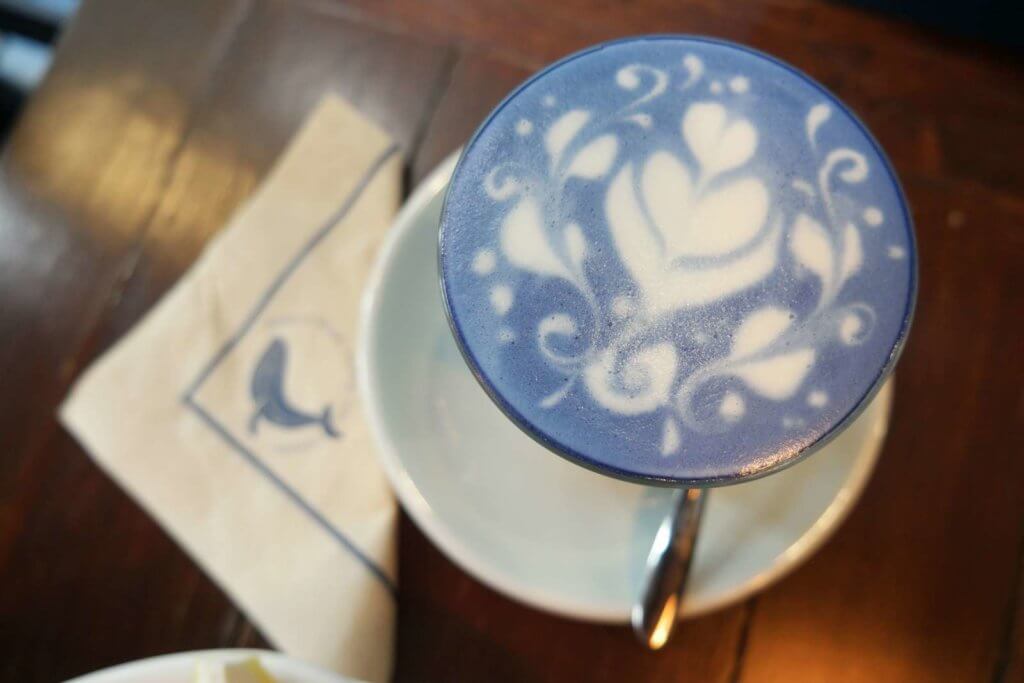 Just around the corner from sala rattanakosin is one of Bangkok’s top attractions. Registered as a “Memory of the World in Asia-Pacific” by UNESCO in 2012, Wat Po was built during the Ayutthaya era and became the Royal Monastery of King Rama I in the following Rattanakosin era. The highlight of Wat Po is the 46-metre long Reclining Buddha, but visitors can also take a walk around the temple’s peaceful grounds and see almost 100 pagodas located all around the temple (including the Great Pagodas of the first four kings of Rattanakosin period). If all the walking has tired you out (or even if it hasn’t), try to make time for a quick no-frills, world-famous massage at Wat Po Thai Traditional Medical School. 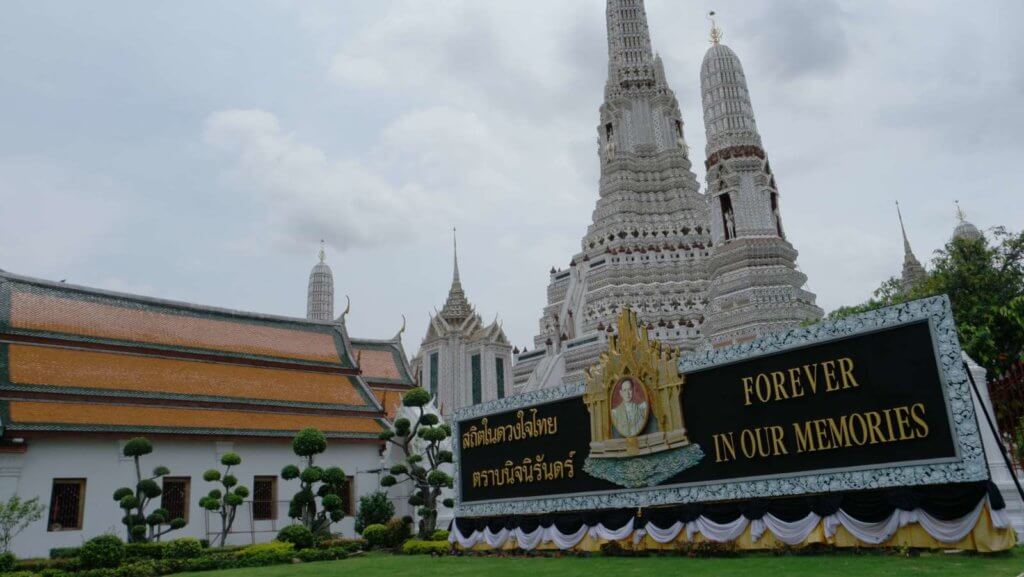 From Wat Po, take a short walk down to the end of Tha Wang Alley and hop on a ferry (3.50 baht ticket) to cross the Chao Phraya River to Wat Arun.

You will be greeted by two giants standing at about six metres tall. As legend has it, the giants of Wat Arun and Wat Po were once great friends but Wat Po’s giants had borrowed money from Wat Arun’s giants and failed to give it back. The ensuing fight caused the land to be destroyed, but who actually won the fight, and whether the money was returned, remains a mystery.

Wat Arun, or Temple of Dawn, was so named because it was where King Taksin of the Thonburi era arrived at sunrise during a journey he undertook while relocating the capital of the Ayutthaya period to Thonburi.

The must-see architecture of Wat Arun is located in the centre of temple, the over 80 metre-tall stupa or ‘prang’ which recently completed its four-year renovation. Visitors can also enter the Ordination Hall and receive blessings from the monks. There’s no better way to wrap up a day exploring Bangkok’s old town than watching the sun go down at sala rattanakosin’s rooftop bar (check sunset times as it’s a show you wouldn’t want to miss!)

Try the refreshing ‘Chao Phraya Gin Fizz’ and the one-of-the-kind ‘Tom Yam Martini’. ‘Sai Nam’ is also a great non-alcoholic choice. On the rooftop, you will be able to see not just one, but five temples – Wat Arun, Wat Po, Wat Phra Kaew, Wat Molee Lokayaram, and Wat Kalayanamitr. After the sun sets, the golden lights of Wat Arun’s prang are turned on for a magical evening backdrop. For dinner, the sala rattanakosin eatery offers exquisite Thai and Western dishes in addition to panoramic views through oversized glass windows. Don’t forget to order our famous ‘Twice-Cooked Crispy Pork Belly’ – glazed with tamarind and served with roast pumpkin puree, stir-fried morning glory, and apple and young ginger marmalade to reflect the east-meets-west flavours of Bangkok – as a fitting end to an inspired day.