12 hours in Ayutthaya: Discovering the cultural and culinary heritage of the ancient capital

The Kingdom of Ayutthaya (1351 – 1767) was once one of the world’s largest and most cosmopolitan urban areas and a centre of global diplomacy and commerce. Ayutthaya lost the war against Burma in 1767, and today, only the capital city’s ruins hint at its former prosperous past. A section of the ruins was declared a UNESCO World Heritage Site in 1991, and remain the historic town’s main draw.

Despite its 504 temples, Ayutthaya has much more to offer visitors, and with an area of only 15 sq. km., you can cover a lot of ground within a single day.

Before getting on with the day, let’s get to know the most convenient transportation of choice in Ayutthaya – the ubiquitous tuk-tuk, whose design varies slightly depending on where in the country you are. Just don’t forget to negotiate a price with the driver before jumping on!

Another tip for exploring Ayutthaya is to start your day bright and early as the city falls asleep soon after night falls.

After finishing a hearty breakfast at sala ayutthaya, hop on a tuk-tuk and pick up some roti saimai before you embark on the day’s adventure – you never know when you need a sweet pick-me-up later on. The floss-like cotton candy is wrapped in sweet roti, which draws influence from the Indian roti. The dessert was created by the Ayutthaya-born Bangpia Sangarun who was helping his uncle sell roti in Eastern Thailand. After learning how to make roti saimai, he returned home and started selling the dessert in Ayutthaya. The product was a hit with locals, he shared the recipe, and soon the ubiquitous snacks became a culinary symbol of the ancient city.

Roti Saimai Road, as you might guess, is lined with many shops selling this treat on a daily basis, perfect for an on-the-go snack or Ayutthaya souvenir. One of the most popular vendors along this stretch is Abedeen-Pranom Sangarun – the shop is located near sala ayutthaya right across the road from Phra Nakhon Si Ayutthaya Hospital and next to a pharmacy.

head across the river for a quick stroll around the beautiful Wat Phutthisawan. Located right across Chao Phraya River from where you just had breakfast, Wat Phutthaisawan was built in 1353 by the first king of Ayutthaya, King Ramathibodi I, on the location where he first settled before establishing the capital. The prang (tower-like spire), located in the middle of the compound, was built to represent Mount Meru and is surrounded by a cloister with a row of Buddha images.

The temple was built in 1360 in memory of King Prasat Thong’s mother. A 35-metre-tall prang stands in the middle, with a hidden entrance half way up the steep stairs. The temple was deserted after the war with Burma in 1767, after which bricks were stolen and the 120 Buddha statues were beheaded. The Fine Arts Department restored the site in 1987 and it was opened to the public in 1992.

After the Thai TV Series ‘Love Destiny’ (Buppae Sunniwas) rose to fame and created ‘Ayutthaya Fever’, thousands of fans of the TV drama series flocked to Wat Chaiwatthanaram as many scenes took place at the temple.

This unique museum was founded by Krirk Yoonpun – a professor of children’s literature and illustrator and author of children’s books – who was inspired to collect toys after visiting the Kitahara Tin Toy Museum in Japan. 20 years later he had enough to open his own toy museum in 2008. Walk through the 2-storey house and take a journey right back to your childhood.

Located right next to Wat Mahathat, Wat Ratchaburana was built where the two brothers of King Borom Ratchatirat II died from fighting for the throne in 1424. In 1957, looters broke into the vault of the main prang and stole many precious goods. Though the looters were caught, some of the goods were never returned.

Time to cool off and take a break in this spacious café right opposite from Wat Ratchaburana. Visitors can enjoy the peacefulness of the café, check out some unique souvenirs, walk out and get some fresh air in the small back garden, and check out the art gallery on the second floor. SAY café offers Thai-western foods, homemade desserts and refreshing beverages; try the colourful rainbow crepe cake paired with fruity “say café smoothie” topped with Ayutthaya’s famous saimai candy floss!

Unlike other temples in Ayutthaya which mostly lay in ruins, Wat Panan Choeng has been repaired many times since the early 14th century and is very busy from the devout who come to pray. The beautiful gilded 19-metre tall Buddha image, the largest of its kind in Ayutthaya, was built in 1324, years before the Ayutthaya era.

Within the same area of the temple, there is a Chinese shrine built in memory of a Chinese emperor’s daughter named Soi Dok Mak who was supposed to marry Phra Chao Sai Nam Phung, the king who ruled here before the founding of Ayutthaya. As legend has it, the Chinese princess arrived by boat, but the king was not there to welcome her. After waiting a long time, heartbroken, she killed herself by holding her breath. The king later built the Panan Choeng temple and the shrine where she was cremated.

Built by King U-Thong in 1357, Wat Yai Chai Mongkhon is one of the most visited temples in Ayutthaya. It is known for having the tallest chedi in the former capital that was built to celebrate the victory of King Naresuan against Burma. Visitors can climb up the steps onto the chedi to enjoy glorious views – particularly beautiful when the sun is setting across the ancient kingdom.

As the last stop for the day, drop by the Krungsri Market where souvenir shops are lined up in the outer area of the market and snacks can be found inside along a canal. Just like the good old days, there are boats selling food ranging from noodles prepared on the spot to snacks on sticks and refreshing coconut ice cream. On weekends, special performances take place near the King Naresuan statue in front of the market.

Return to sala ayutthaya and recap the day’s adventure at the riverside restaurant and bar with both indoor air-conditioned dining area and a picturesque outdoor dining deck. The restaurant’s signature “Taste of Place” dish is Goong Maenam Ayutthaya. Locally caught giant freshwater prawns are grilled and served with papaya salad or organic brown rice and accompanied with a choice of traditional Thai sauces and dips. The aquatic animal symbol of Ayutthaya is the star ingredient in this one-shrimp show, charcoal-grilled to juicy perfection – a delicious way to end a fulfilling day in Ayutthaya. 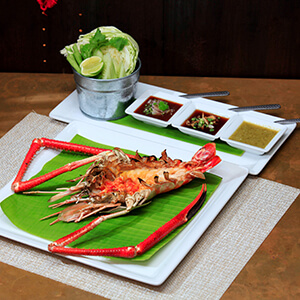