Located in the heart of the old Lanna Kingdom, Chiang Mai – fondly called the ‘Rose of the North’– is known for its cultural charm and natural beauty. In fact, the northern Thai city was recently voted no. 3 in the World’s Top Cities list as part of the Travel+Leisure World’s Best Awards 2017.

Wat Ket, named after the eponymous temple and museum, is one of the city’s most famous landmarks, located in the historic quarter on the east bank of the Ping River. The leafy neighbourhood was once a residential enclave where foreign timber merchants lived. Today, the area is home to quirky cafes and shops with an artistic vibe blending the traditions of old Chiang Mai with the trends of today.

With a prime location right on the river in Wat Ket, sala lanna Chiang Mai is a perfect base from which to take a walking tour and explore this attractive area’s many cultural and culinary attractions. 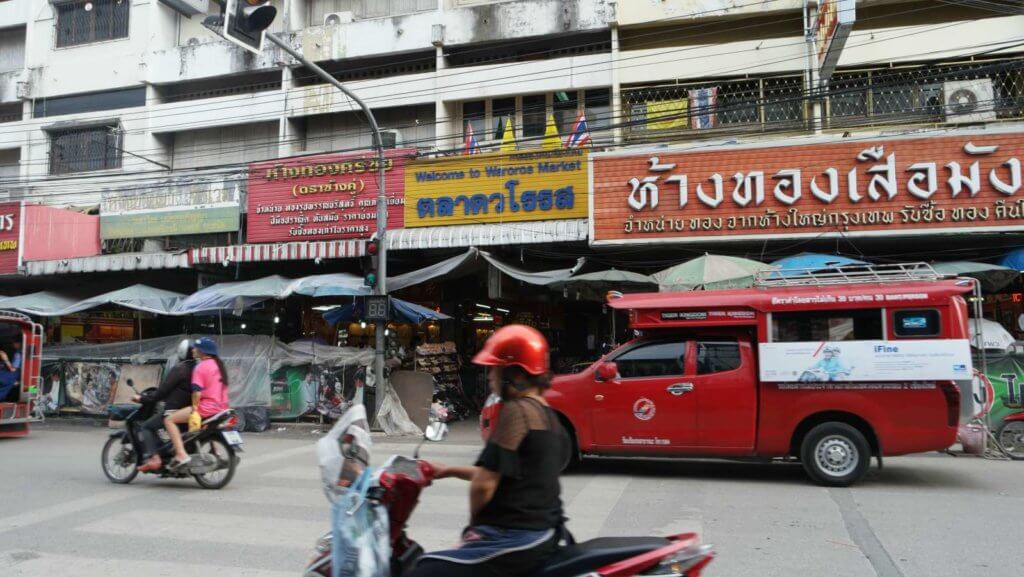 Perhaps the best place for a taste (sometimes literally) of local culture is Warorot Market, located across the river and just a five-minute walk from sala lanna. Founded in 1910 by Princess Dara Rasmi and named after the then-ruler of Chiang Mai City “Intavaroros Suriyavongse”, the market has played an important role in the local community for over a century.

Exploring the market, known locally as Kad Luang (‘Big Market’), might seem a daunting task, especially for first-time visitors, but with hundreds of shops and some of the city’s best local culinary treats to enjoy, getting lost has never been so appealing.

Give yourself two to three hours to wander the market; some notable shops worth hunting down include: 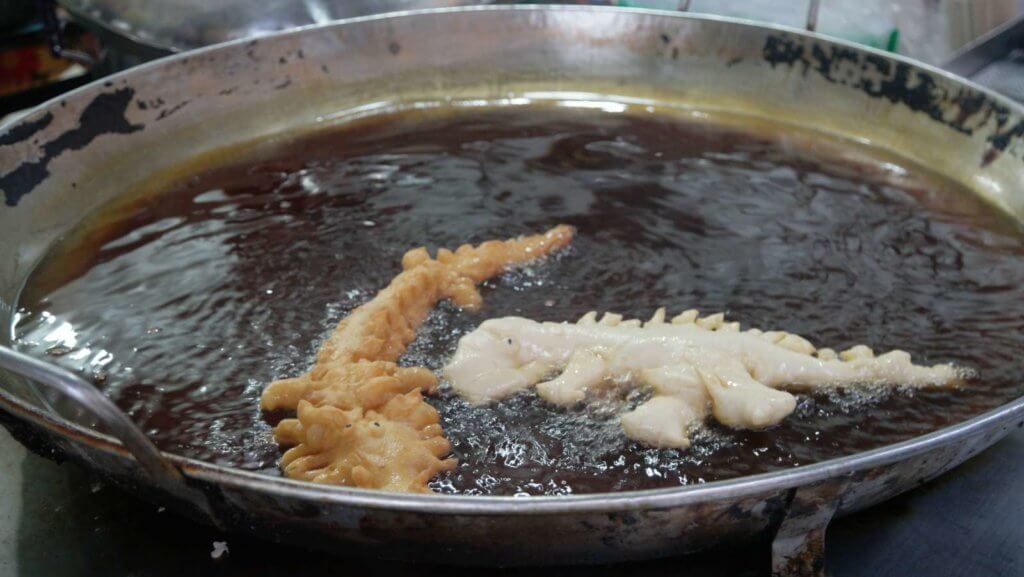 “Ko Neng” started out over four decades ago selling regular-shaped patongko from a food cart, but in mid-2017 he moved to more permanent premises, and at the request of his two children, started crafting the dough into fun shapes including dinosaurs, dragons, and other creatures. Ko Neng, who can be seen at the eatery just about every day creating his famed treats, isn’t your normal shop owner. He has a master’s degree in management and evaluation and is also a university lecturer. He will even be guest starring in a movie very soon.

Open daily from 6 – 11 a.m., though we recommend going early to avoid the inevitable long queue. 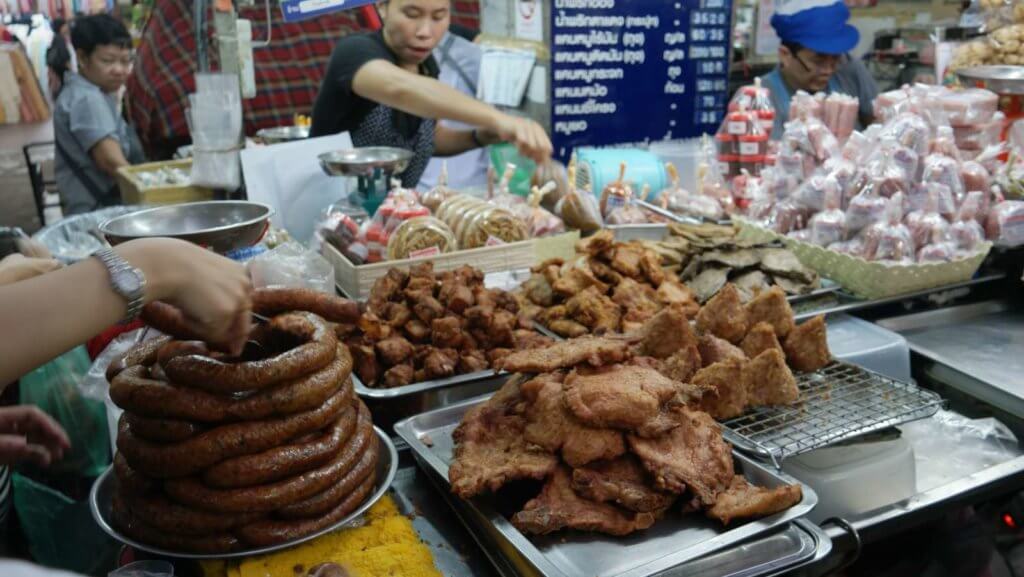 When Thai people think of Chiang Mai, one the first tastes that comes to mind is “sai oua”, the famous northern sausage stuffed with herbs. One of the best places to grab a bag, or even a few kilos of the stuff, is Sai Oua Damrong, located in the heart of Warorot Market, which has been serving fresh local sausage for at least 30 years. To find it, just follow the crowds – there are always people lining up to buy sai oua – no matter what time of day.

While you’re there, pick up some nam prik chili paste and few other northern treats, all of which, except for the pork rinds, are homemade.

‘Lao Chow Alley’, named after the Chinese ancestors who settled in the area, sits alongside Warorot Market. The alley used to be called the ‘China Town of Chiang Mai’, but has since evolved into more of a Hmong Market, with shops selling colourful products handmade from Hmong-spun fabric. 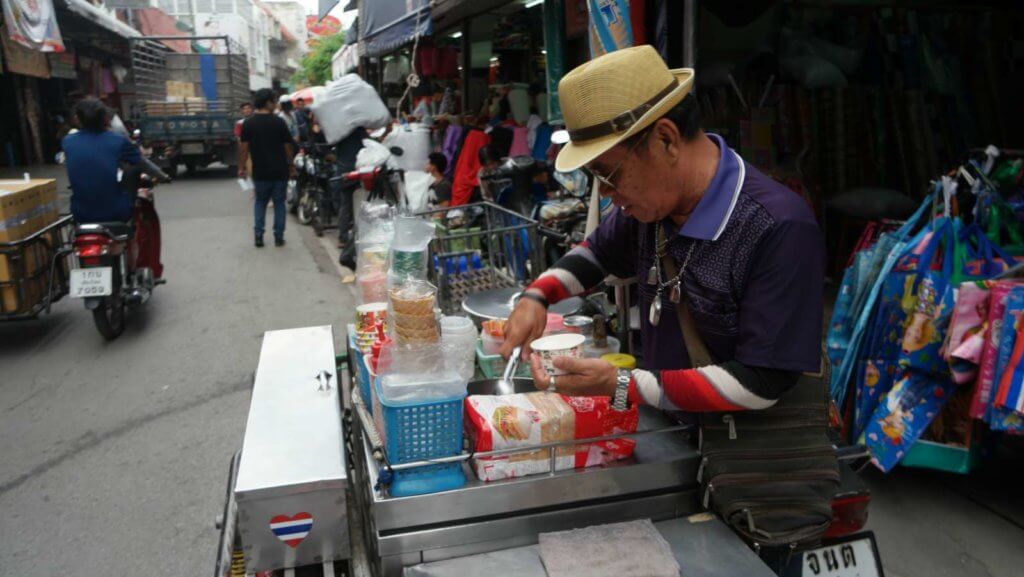 If you see one of these roving bike carts around the market (and elsewhere around the city), don’t miss the chance to taste this Chiang Mai exclusive ice cream! Pa Tan is known for its rich and creamy coconut ice cream, but also offers other flavors such as strawberry, chocolate, black bean, and many more. Three scoops plus toppings will cost you just 20 baht! 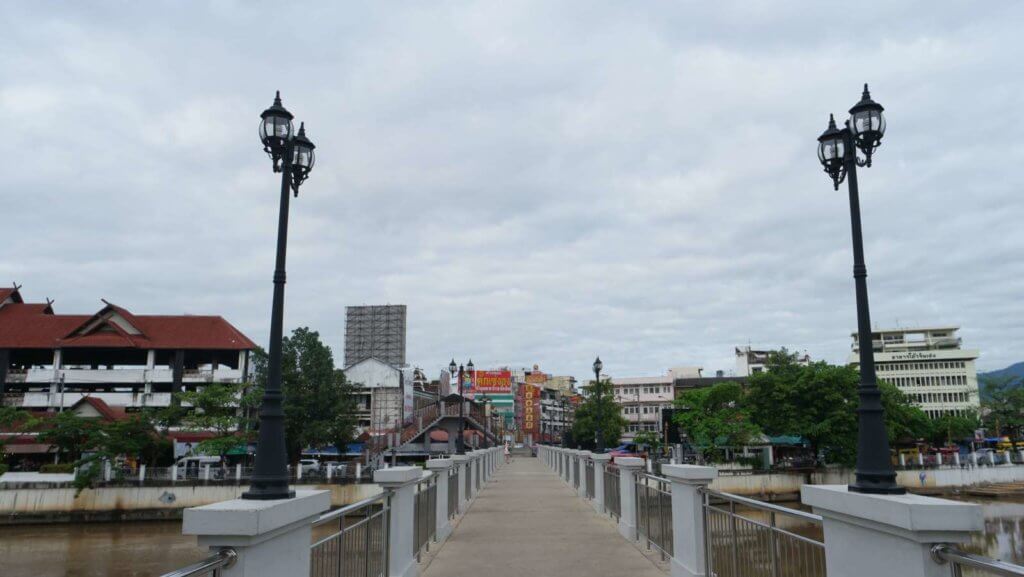 After a few hours exploring Warorot Market, head back towards sala lanna, crossing the same 51-year-old pedestrian bridge that led you there and pause on the “Bridge of Love” to ponder its story. The construction of the current bridge – a much-needed replacement for the former bamboo structure – was funded by Montri, the owner of the biggest fabric store in Chiang Mai, who donated the money following his wife’s passing. The kindness of the hard-working entrepreneur and his spouse touched the hearts of all those who knew them. Chansom Bridge is therefore considered a monument to their love for each other and the city. 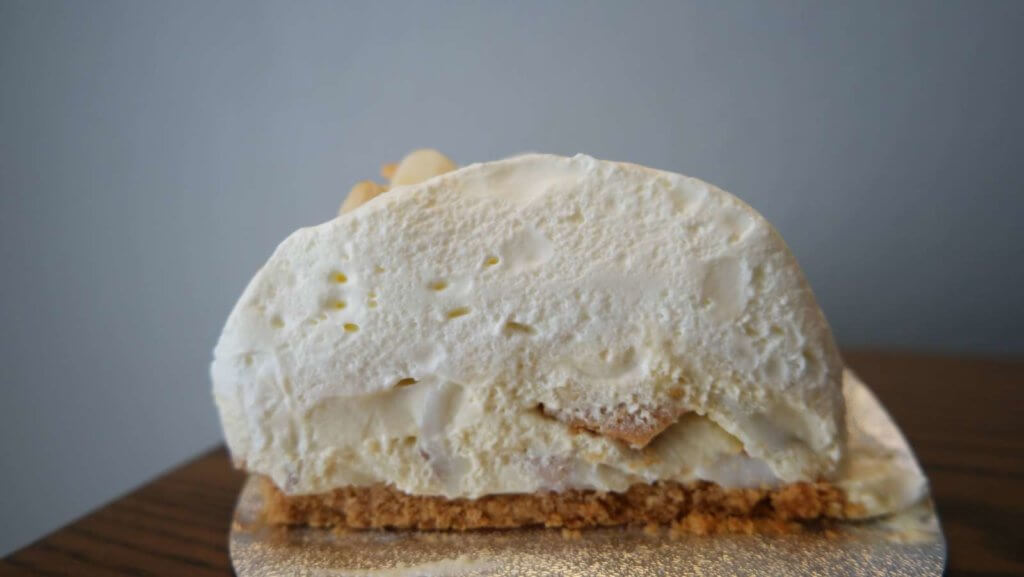 Right across from Wat Ket temple, there is a small and cosy coffee shop whose name means literally ‘A home full of love’. The café, which has been open for six years, is run by a couple from Chiang Mai. The daily fresh sweets – made personally by the wife – include the famous young coconut pie which is light and creamy (word of warning: you will finish the whole piece before knowing it!) The shop opens every day from 9:30 a.m. to 6:30 p.m. 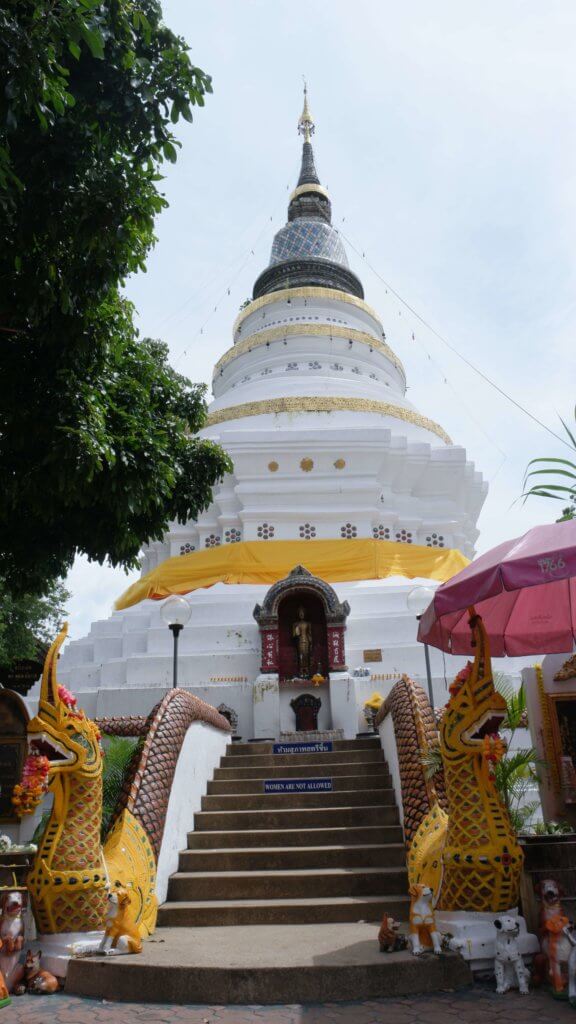 Take a stroll around the temple for which the neighbourhood is named after. Wat Ket was built in 1428 and its main attraction is “Phra That KetKaew Chulamani Chedi”, a stupa which symbolizes the highest level of heaven. The stupa is believed to house a Buddha hair relic and is the symbol of the year of the dog. In 1999, an antique museum was added to the temple, which houses an eclectic selection of items donated by the community. 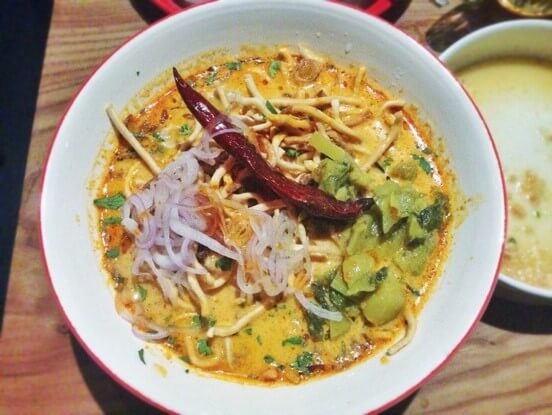 Walk just a little bit further along the road on the same side as Wat Ket, and you’ll come to a set of old wooden gates leading into the perfect lunch spot. Tanita’s wooden buildings and furniture make guests feel immediately at home, and an engaging on-site gallery helps keep the hunger pangs at bay while you are waiting for the food to be served. A choice of Thai cuisine and coffees grace the menu, but the real recommended dish is the famous northern Thai chicken noodle curry – Khao Soi Gai. 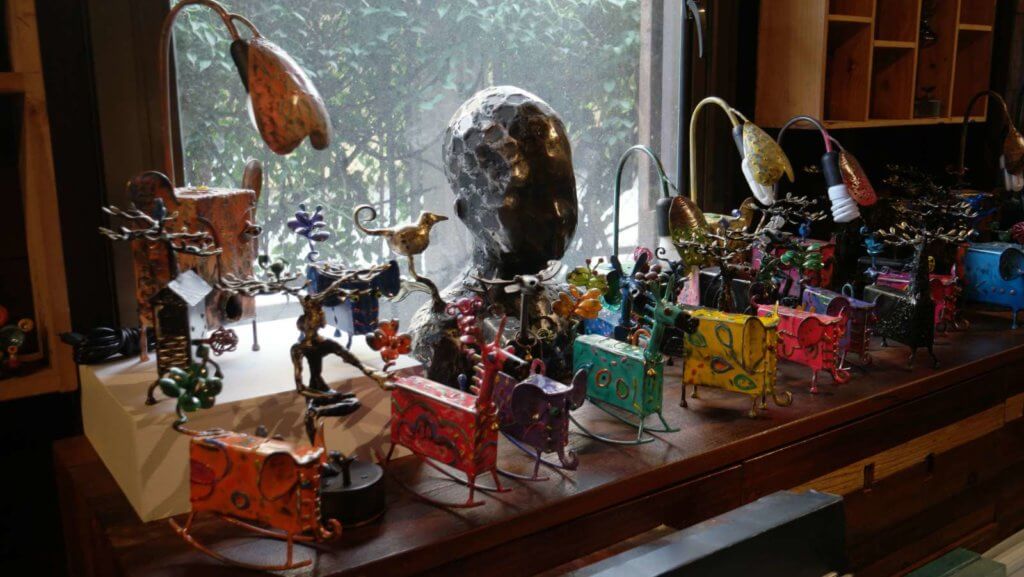 As the name suggests, ‘The Meeting Room Art Café’ is more than just an ordinary coffee shop. The shop’s owner Joe, an art collector himself and a great source of information on the local art scene, uses his café as a platform to showcase local talents. While you’re there, browse the small gallery, which hosts exhibitions by local artists, rotating every two weeks. The café also serves tea, coffee, homemade pastries and alcoholic beverages, and you can easily spend an hour browsing the art between sips and chats with the owner. 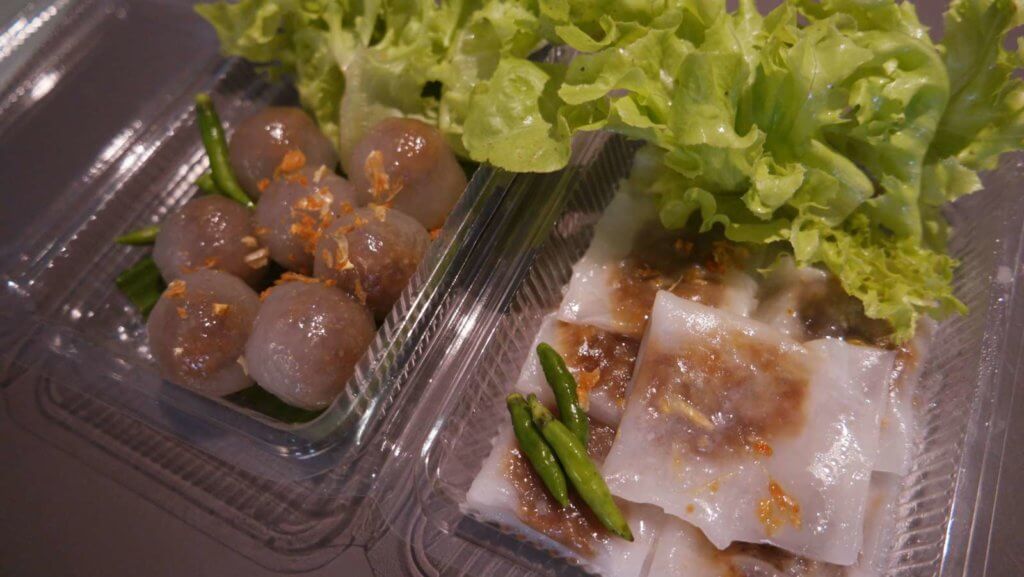 For a delicious afternoon snack, swing by the street side eatery directly across from Wat Ket and pick up a box of steamed rice flour dumplings with a sweet and savory filling, made fresh on the spot for just 20 baht. The dumplings’ delicate skin and the special coconut milk sauce on top make the grab ‘n’ go stall a local foodie favourite. Uncle Kajorn (or ‘Loong Kajorn’) started selling Khao Kriap Pak Mor and Saku Sai Moo (steamed tapioca dumplings) over 30 years ago, and since his passing, his children have carried on the tradition at the shop. 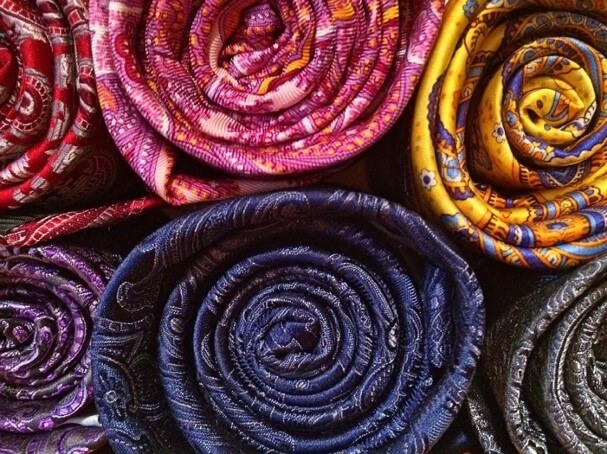 Vila Cini has been embracing the beauty of Thai silk for more than 17 years. Take a walk back in time through the beautiful 50-year-old Sino-Portuguese house. The silk products are actually made onsite and there are also exquisite home decorative items available to be purchased as souvenirs. 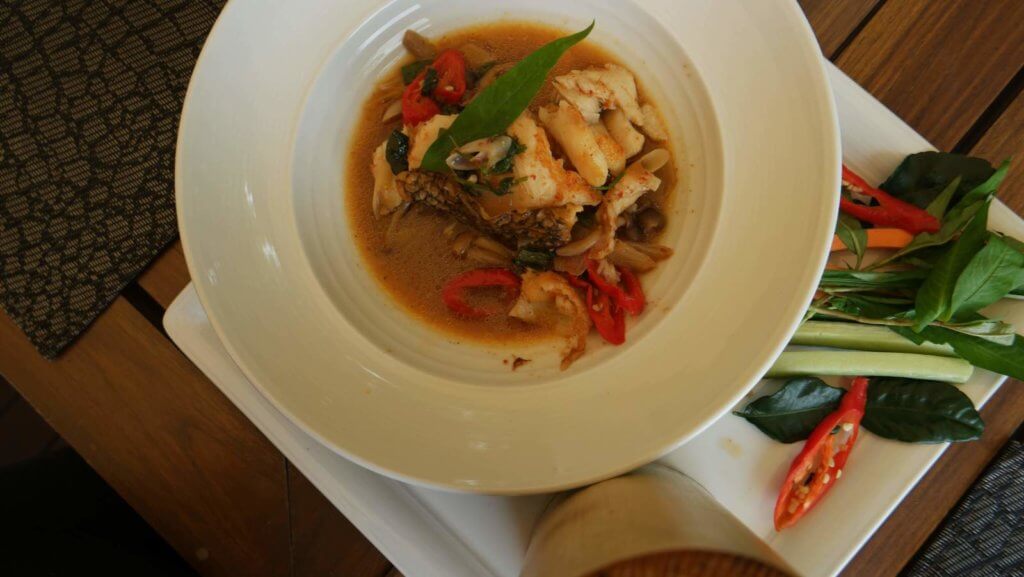 After a full day exploring, return to sala lanna and relax by the river at On the Ping riverfront eatery and bar. Make sure you try our chef’s recommended ‘Traditionally Prepared Pacific Snow Fish’. The authentically flavoured dish is charcoal grilled in a hand-woven bamboo cylinder, which adds drama to an exquisite meal when the container is opened and the freshly cooked fish served at your table. 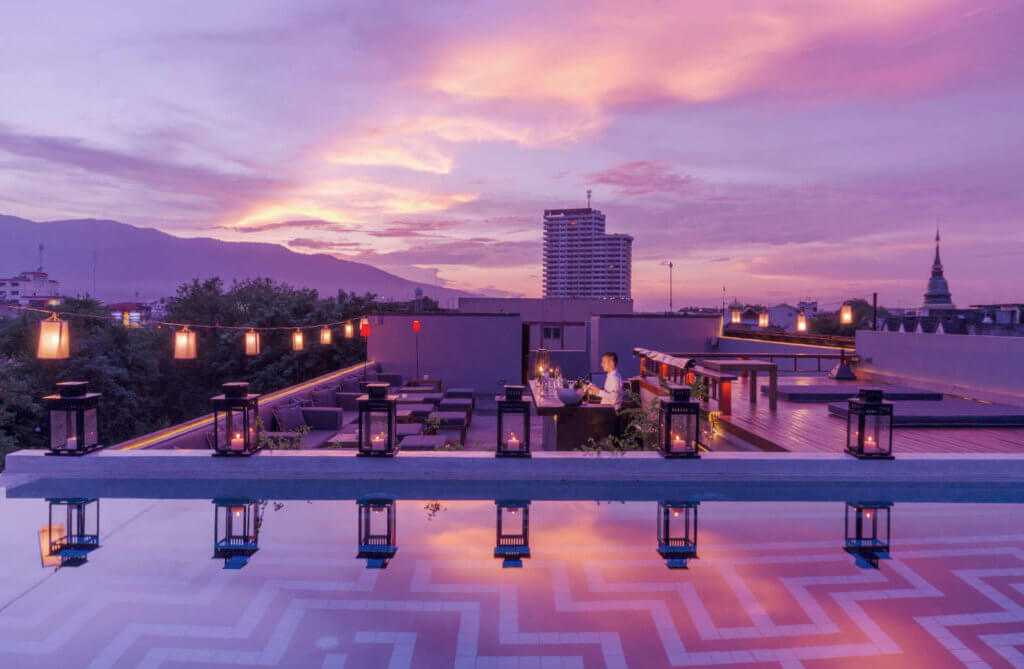 End the day on a high at the sala rooftop bar while enjoying a choice of tempting cocktails by the pool. Try the refreshing ‘Smash Cocktail’ with mango, strawberry, or the fruit flavours of your choice. The combination of mountain and city views is a perfect reminder of Chiang Mai’s myriad treasures.